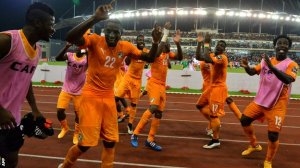 Perhaps the most difficult of the Quarter-Finals matches at the 2015 Africa Cup of Nations was the fourth and final one between an impressive Algeria and favourites coming into the competition, the star-studded Cote d’Ivoire. Although unbeaten coming into this match, the Ivorians have flattered to deceive so far in Equatorial Guinea with star man Yaya Toure unable to truly shine throughout the group stage. Algeria had tasted defeat with a last minute goal conceded to Ghana, but were impressive in their other two games brushing aside South Africa and Senegal respectively.

It was Algeria who started the better of the two teams, settling early with nice touches in midfield and looking assured at the back, captain Bougherra the lynchpin of a strong defence. The warning signs were there for all to see before the ten minute mark when Porto’s Yacine Brahimi surged into the Ivorian box, his deflected cross causing mayhem and confusion amongst the defenders, El Arbi Soudanii capitalising but his shot was tame and dealt with easily enough by ‘keeper Sylvain Gbohouo. It was further proof to add to the argument that Cote d’Ivoire’s weakness is in their defensive abilities, coach Renard looked on suitably unimpressed by what he saw. But gradually the Ivorian Elephants crept into the match, Gervinho back in the starting line-up after serving a suspension, looking dangerous when in possession, but just after the twenty minute mark it was Serge Aurier who came close with a headed effort coming back off the base of the Algerian post. But the West African giants were not to be denied, going one-up four minutes later when Bony headed home a tantalising cross from Max Gradel. The Algerian defence were caught flat-footed, even keeper M’Bolhi seeming confident Bony was off-side but replays showed the Manchester City frontman was clearly on-side by some distance.

One nil is how it remained until half-time at the Nuevo Estadio de Malabo, a far more gripping game than the one-sided Quarter-Final earlier in the day between Ghana and Guinea. With a semi-final place against the DR Congo up for grabs Christian Gourcuff’s Desert Warriors started the second half with far more purpose, first to everything the urgency was back in their play. And within five minutes of the second-half kick-off they were deservedly level, Soudhani firing home a pass from the ever impressive Riyad Mahrez. The Ivorian defence had once again, not covered themselves in glory in the build up to the goal, much to the disgust if the increasingly animated Herve Renard on the sideline. The game was to hinge on a two minute period shortly after the hour mark though. Firstly Gbohouo needed to be at his best to save at point-blank range from Soudhani, one of the saves of the tournament, in importance as well as quality. Merely seconds later, Yaya Toure lofted forward a free-kick which Wilfried Bony again got his head to, powering a magnificent header past M’Bolhi to put the Ivorians ahead against the run of play.

This was a killer punch in the match and rocked Algeria, now behind in a game they had been dominating. They continued to push forward, for once the Ivorian defence resolute, Kolo Toure showing his vast experience in a steady, hard-working performance. Dinamo Zagreb’s Hilal Soudani continued to look dangerous but the Algerians, despite their throwing bodies forward were unable to trouble Gbohouo in the closing exchanges. Inevitably the gaps appeared at the beack as the Algerian’s desperation grew, Gervinho scoring from a breakaway, calmly stroking a third goal past M’Bolhi after great work from substitute Tallo Gadji of Roma, staking a claim for a starting position in the semi-final. That game will now take place on the 4th of February in Bata against DR Congo, a game they will be expected to win. The scoreline flattered Cote d’Ivoire in the end, Algeria having played some of the best football of the competition, exciting to watch and with pace and skill across the park. Herve Renard himself paid the Desert Warriors the ultimate compliment after the match stating that they were the best team in the competition. Algeria’s own coach Gourcuff was in agreement and had no complaints in his side’s performance, the only regret being the late goal conceded against Ghana in group play. Nevertheless they leave the tournament perhaps having under-achieved, from here the Ivorians will feel this is finally their time, having come through the toughest of the Quarter-Finals, but how many times have we seen them self-destruct from this position.